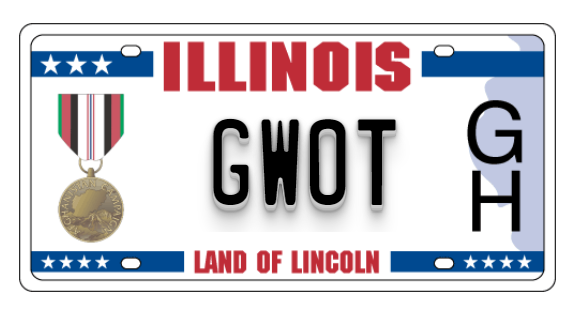 State Representative Brad halbrook (R-Shelbyville) reported that the bill he is sponsoring has passed out of the House and now heads to the governor for consideration. Senate Bill 2518 concerning charity license plates in Illinois would expand the availability of these types of license plates to service members and veterans who have served during the aftermath of the terrorist attacks of September 11, 2001 fighting the “Global War on Terrorism.”

“I am proud to carry this legislation in the House to help honor our military men and women who have been fighting for us in more places than just Iraq and Afghanistan,” said Rep. Brad Halbrook. “This Bill will appropriately recognize other combat military service occurring since 9-11, including deployments in Saudi Arabia, Turkey, Israel, Jordan, Georgia (the former Soviet Republic), Djibouti, Chad, the Philippines, and many other countries.”

This legislation will permit the Secretary of State to issue “Global War on Terrorism” license plates to residents of Illinois who have earned the Global War on Terrorism Expeditionary Medal from the United States Armed Forces. The plates will be available for passenger vehicles of the first division, including motorcycles, or motor vehicles of the second division weighing not more than 8,000 pounds.

The Global War on Terrorism Expeditionary Medal (GWOT-EM) is a United States Armed Forces award created by former President George W. Bush on 12 March 2003, through Executive Order. The medal recognizes those military service members who have deployed overseas in direct service to the War on Terror from 11 September 2001 to a date to be determined. The military operations covered include Enduring Freedom, Iraqi Freedom, Nomad Shadow, New Dawn, Inherent Resolve, Freedom’s Sentinel, and Odyssey Lightning.