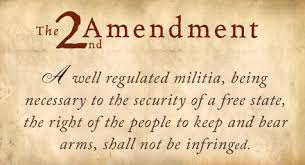 The first piece of legislation, House Bill 2354 would allow family members to get court approval to remove firearms from other family members they claim could hurt someone or themselves.

“Can you imagine the numbers of people who could have the government sweep in to take your guns just because of a temporary argument between a husband and wife or between brothers,” said Rep. Halbrook. “I did not support HB 2354 because the bill unfairly limits due process and could potentially make criminals out of law abiding citizens.”

The second piece of legislation, Senate Bill 3256 establishes a ’72-hour waiting period’ while background checks are performed on gun purchasers.

Rep. Halbrook said “the 72-hour waiting period bill is yet another example of Chicago Democrats playing to the extreme anti-gun people with more bureaucracy.” Halbrook added, “this legislation is an attack on our rural Illinois communities and will harm gun dealers and gun and knife trade shows. I am committed to continue to work to protect our constitutionally guaranteed Second Amendment rights.”