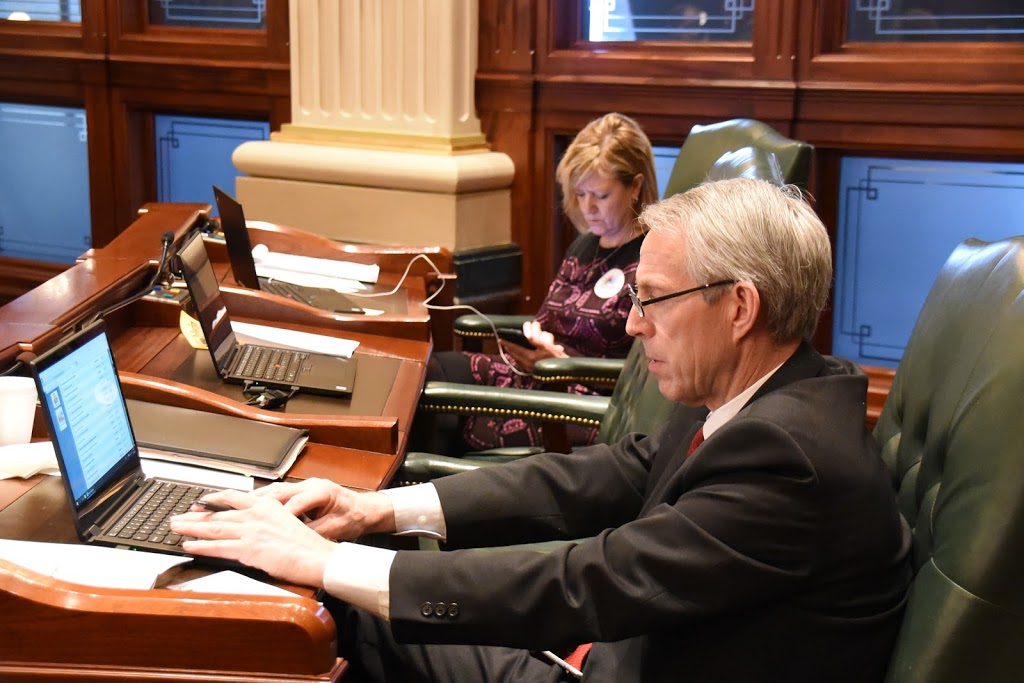 Rep. Halbrook reviews legislation on his laptop during House proceedings.

“The Governor today tried to make the point that Illinois is united. He said in his address that ‘trying to separate Chicago from the rest of Illinois, whether rhetorically or literally, will not solve the economic challenges of downstate Illinois. Quite the opposite. Some of you need to stop pretending that one part of Illinois can exist without all the others. We are … one Illinois.’

I appreciate the sentiment that Illinois is one state, but the truth is Chicago politicians continue to attack our values and our way of life. The message the Governor is sending to the thousands of people who are upset enough with what is happening in our state that they want to form a new state separate from the City of Chicago is to sit down and be quiet and just accept having their values trampled. This not the way to win over residents of rural Illinois.

There was nothing in the Governor’s speech to give downstate residents any hope that he is going to stop attacking our values and our way of life. In fact, just the opposite. The Governor wants to preach unity, but his actions tell a much different story. He is going to continue to double down on his extreme, liberal agenda and continue to divide Chicago and downstate Illinois.

It is clear our point of view matters little to this Governor. His budget is just the same as the record $40 Billion spending plan he signed last year except the new budget sets a new record by adding another $2.2 billion in spending, and he’s relying on his graduated income tax increase scheme to pay for it. Illinois families are already the highest taxed in the nation, and more people have fled our state in the past ten years than any other. What we heard today is just a continuation of the Democrats’ tax and spend philosophy that created this mess in the first place. We don’t need more taxes. We need reforms and sadly the Governor made it clear reforms such as spending, and pension reforms are off the table.”